Last weekend we ventured out to our good friend’s farm.

It had been four years since we’d been up there.  None of us could believe it had been that long since our last adventure.  It seems like only yesterday at this farm that the Senator nearly blew up a car with one of his many firework displays!

I mean, we all know the Senator has pyrotechnical tendencies.  And, on the drive up to this farm, there are always many….I mean MANY opportunities to purchase fireworks….especially during the summer months.  It would also be an understatement to think the Senator would overlook this popular buyer’s market.

So, when the Senator arrived at the farm with a truck load of fire four years ago…..and in the process of demonstrating his mastery of the art of fire nearly blew up a car when one launched sideways.  Seriously.  Sideways just like a missile….NOT surprising we haven’t been asked back…..until last weekend.

The topic of the farm came up just prior to the Holiday weekend and we all jumped on the idea of heading up there for a nice, relaxing evening in the Oklahoma heat and humidity.

It really is peaceful.  Promise.

The girls posed for a pic prior to demonstrating some cheer stunts. 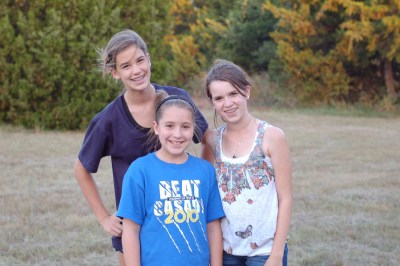 The original fric and frac, headed off to inspect the fire pit and collect some kindling.  Probably not the greatest idea knowing these two…..but, who was I to get in their way.  I was too busy documenting a little bit of the fun!

The boys were definitely conjuring something up…..yep.  Whatever they were planning I’d bet it had to do with fire!

Meanwhile, back up at the hacienda…..the cooks were not in the kitchen, but watching the beautiful Oklahoma sunset.

Sometimes, last minute gatherings prove to be the most fun.  My BFF pulled this one off in less than 24.  Not too shabby!