Pioneer Woman and the Senator’s Wife

It came as no surprise that I would run into my good friend, Pioneer Woman while we were in New York.

You see, Pioneer Woman and I have known each other since before we were born. Our moms have maintained a life long friendship that began in college.  Our dad’s went to Medical School together. We were born two years and one week apart and grew up on golf courses, albeit in separate cities, but we spent the summers together.  We traveled together and even went to the same college together.   After all, we are ‘friends till the end’, from ‘womb to tomb’.

But the similarities don’t end there.  After graduation from USC, PW and I both worked in big cities.  She was in Los Angeles while I worked in Washington DC.  Yet it was no coincidence when we each decided, on our own of course, that we would be moving back home to Oklahoma.  Our lives have always been in sync that way. Always.
And as for our girls…

They will be friends forever because they were friends before they were born. They don’t really have a choice, do they?
So, naturally I just smiled when I learned that PW and the girls would be in New York the same time we would. This came as no surprise at all.  And, boy did we have fun!
We walked the streets and took a lot of photos.  Well, PW did.
I just watched our girls enjoy one another while she documented it for eternity.  Friendships that pick up right where they left off are to be treasured. And their excitement to see one another in New York City was just flat out fun to watch. 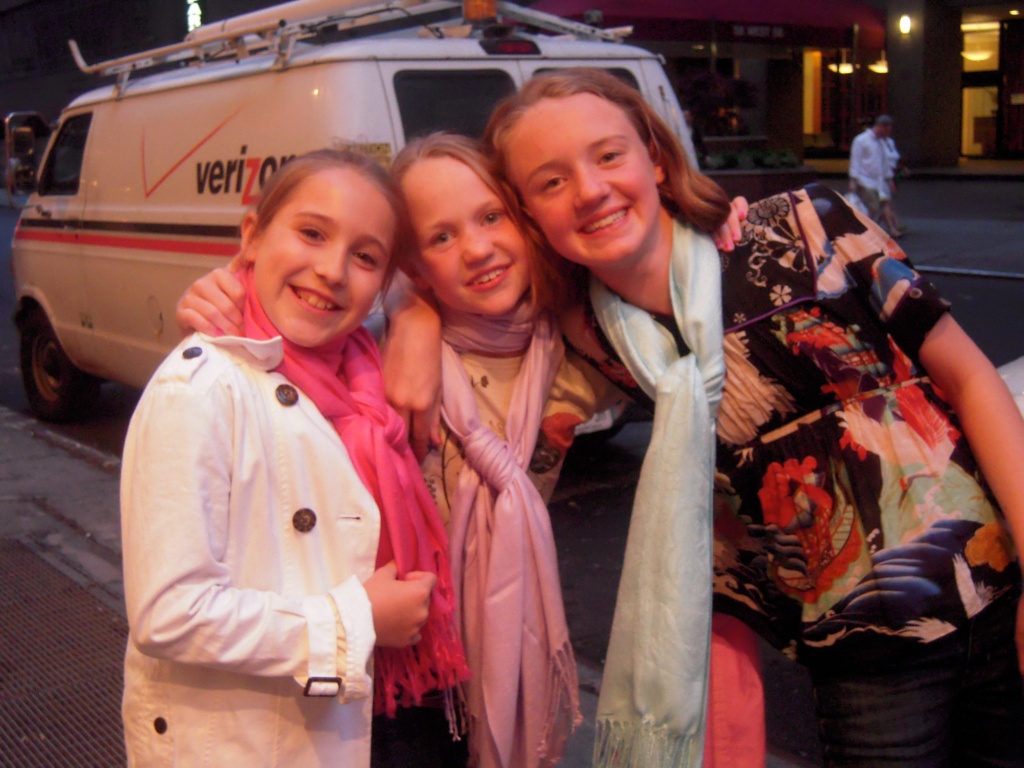 Dinner was rather festive at Quality Meats. PW chose the location because when you have one of the country’s best blogs with hundreds of thousands of followers, you receive tons of fabulous recommendations when you travel.  I love having famous friends!
And if you have ever eaten a meal with Pioneer Woman, you are aware that each plate of food is analyzed and photographed.   My salad was “uneventful”, while her 4lb lobster was “divine”.
The girls ditched their gnocchi to inspect the bathroom at Quality Meats!  It’s a girl thing.
Let’s just acknowledge that Quality Meats will never have a shortage of hand towels in their ladies room. Never.

Because PW and I  worked hard at having a “happy plate”, we desperately needed to walk off those scrumptious calories.  So what did we do? We headed to Dylan’s Candy Bar.  I love New York for that.

Dylan’s is a MUST see in New York.  It is a colorful candy store that was started by Ralph Lauren’s daughter. And I mean colorful!
Just imagine the tub full of gum balls that greets each visitor!  Our girls totally ignored the sign that said ‘please do not touch’.  Can you blame them? 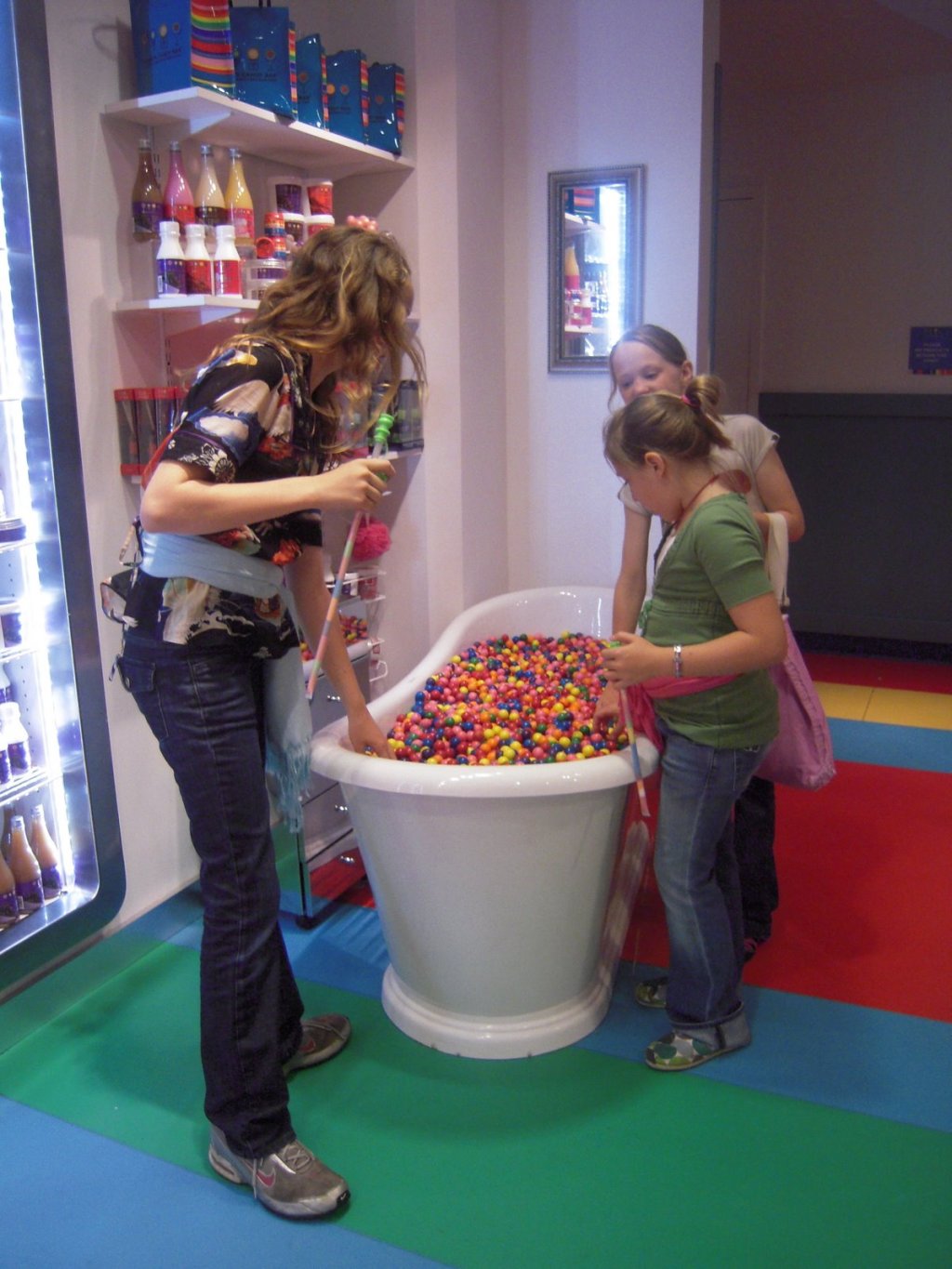 Who knew there could be enough candy to fill a three story building! I treated them to these little vials of sugar while PW gave them empty, plastic bags with instructions to ‘fill them to the brim’ with candy.  Our girls aren’t spoiled or anything.
Of course, some people with a famous blog just can’t leave their technology alone. 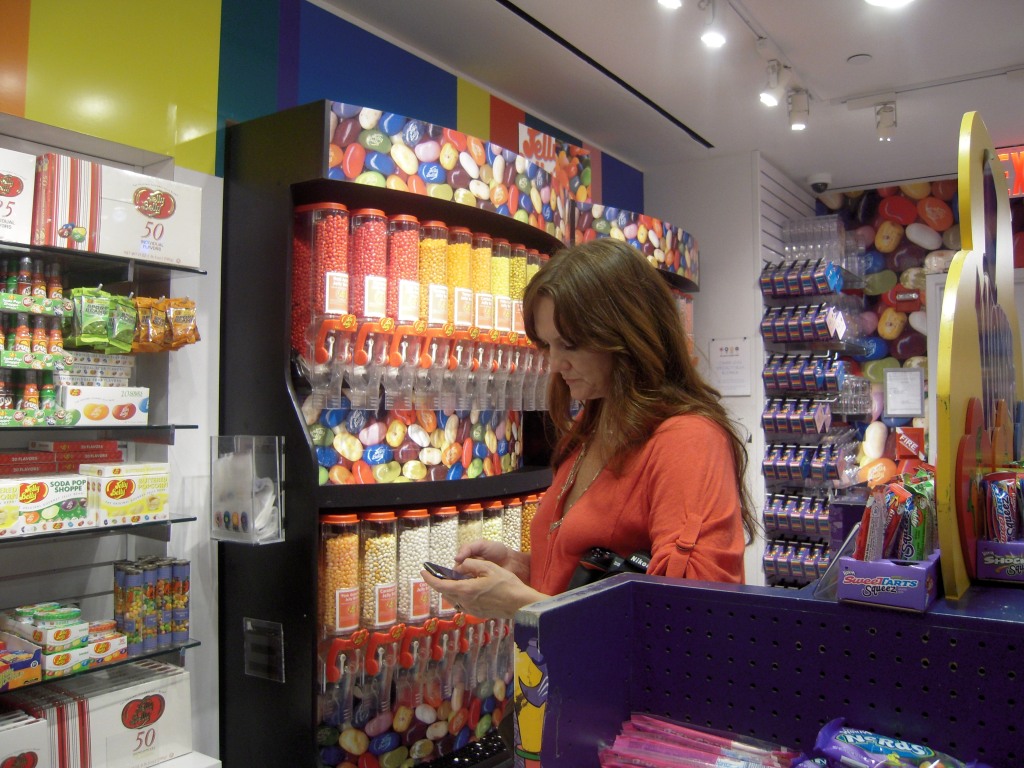 But, I suppose when you have over 18,000 followers on twitter alone it’s hard to keep up!
You go girl!
Love, the Senator’s Wife
P.S.  Oops! As of this afternoon, that would be over 19,000 followers on Twitter for PW!  Dang.

← A Trip to Tribecca
Our Teenager! →

3 Comments on “Pioneer Woman and the Senator’s Wife”