A Trip to Tribecca

Last summer a film crew came to our house and filmed our family just doing our normal, every day stuff. It was an, um, lets say an interesting experience and all for a documentary being made on motherhood in America. If I didn’t really like the film’s director so much, I never would have agreed to let them invade our home and our lives for a few days. The thought of having people follow you around just creeps me out. Besides, we are not that interesting.

Anyway, the film’s director, Sarah Klein lives and works in New York and knowing we were going to be there a few days I decided to give her a call. I love knowing interesting, smart people who do important things and after sending me a fabulous list of ‘must see’ items in the Big Apple, Sarah invited me to her studio to screen the film. Of course I said yes.

So, last week in New York I left the Senator in charge….at the American Girl Doll Store… 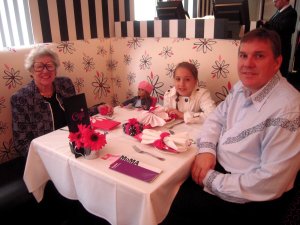 …while I went on a mission to SoHo. A mission to screen this film and possibly bump in to a famous person or two. And boy did I have fun. It had been too long since I traipsed about independently in a big city. And the SoHo -Tribecca area is like a mecca for artists. You can feel it in the air. That air has atmosphere.

Sarah met me at the door, and quickly pointed out that the apartment where Heath Ledger died was right across the street and occasionally the Olsen twins (Mary Kate and Ashley) will walk by because they live in that building. I wanted to ask if we could hang outside for a while but I didn’t want to be rude. I just took a photo instead. 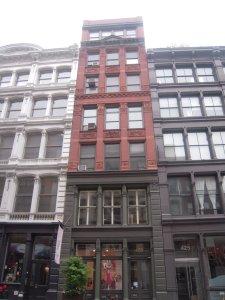 Maybe I was simply a little hesitant to go in and watch that documentary. But, we did go in and screen the film and it was such a pleasant surprise. She has put together a very interesting piece that follows a handful of mothers in America. It was like watching a reality t.v. show I think, but I tried to look past that (the reality part) and see the bigger picture.

Then we went to a hip restaurant called Cafe Balthazar. I knew it was a really hip place because it was packed at three o’clock in the afternoon and the only spot to sit was at the bar. Bummer. So, we had a glass of wine and talked about the film. We talked about some of her other projects, and about how this film has been released in Europe, but how she is looking at several different options for release in the United States.

I found myself sitting in a very posh New York establishment, talking about life and film with a brilliant documentary film maker. I must have been so enthralled that I forgot I had to be back for dinner by 6:30. Oops.

And it was raining outside which causes a severe shortage of available cabs in New York.

Why is it New Yorkers, who love to walk everywhere, don’t walk in the rain? I don’t even think they take the trains when it’s raining.

Not to worry though, Sarah hailed me a cab in typical New York fashion. I would never have been that, shall we say, gracefully aggressive? As we said our quick goodbyes I knew I did not want this afternoon to end. I need to get out more often. So, I secretly wished that this cab might be the cash cab. Have you ever heard of the cash cab? The cab that drives around New York and asks trivia questions of its passengers…and with each correct answer the passenger gets some cash? I know, I watch too much television.

So, naturally I asked this cab driver if today was my lucky day? Was I riding in the cash cab? He looked at me funny and stuttered for a minute. Then he finally said, “lady, all cabs have cash”.

There was a little language barrier. So I sat back and enjoyed the ride home in silence, quite satisfied that my day with a director across from where Heath Ledger died was good enough.

Next up, dinner with an old friend…

← Big Time in the Big City!
Pioneer Woman and the Senator’s Wife →

2 Comments on “A Trip to Tribecca”