More Tales from the Trail… 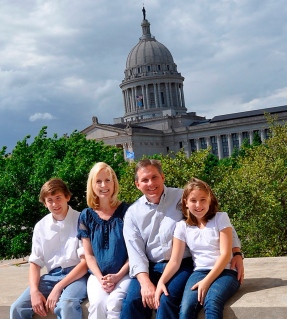 The Senator’s fundraiser was fabulously fun. They always are – but that will never change the fact that I am apprehensive each and every time.  I suppose in my eight years of being a Senator’s wife, I have realized that when a candidate has the support of many people, these events are enjoyable.  But, when the candidate is running and not many are following…that is when they become uncomfortable…at least for me anyway.

This week, however has been full of stress.  On Monday, the Senator officially filed to run for re-election.  The first time he did this eight years ago, we went to the Capitol all dressed up with our children and a camera. Once we got there, we quickly realized that the check which accompanies the document had to be a cashiers check and that the official paper he was filing had to be notarized.  Oops.  Of course we panicked and scrambled and ran to the closest bank where these details were quickly completed.

This time around, the Senator went by himself and turned the forms in without any pomp and circumstance. No wife, no children….no camera. Meanwhile, I was at home glued to my computer, watching the screen to see who else would step up to the plate and take the Senator on….

We knew there was a lady out there on the horizon planning on challenging the Senator.  We had heard about her back in March.  However, this year as with every election cycle there are winds of change blowing through the electorate which will motivate various individuals to enter into public service.  Eight years ago the Senator had just opened his own small business and was angry at the bureaucratic red tape that impeded economic success in our state.  He had no idea who he would be running against or why, only that the incumbent had chosen to retire and the senate seat was being vacated.

This year, there is a strong anti-incumbent mood in the air………we’ll see.

Regardless, the Senator is locked and loaded and ready to continue his fight for a more prosperous future. (Just a little political rhetoric for your amusement!)