What a wild and crazy night at the Q. Oh my goodness.

Determined not to miss our bus this time, the Senator and I loaded up early so he could run for Mayor of Bus #1 and I could ensure that we made it to the arena in time to hear the speeches!

We were dressed and ready to go in our matching Oklahoma delegation Blazers!

It would seem the custom of each delegation is to wear matching outfits, shirts, hats or jackets that are representative of their individual state.  Oklahoma wears these navy blue blazers with an Oklahoma patch. Texas has shirts and hats with the emblem from the lone star state, Alaska has jackets with their state pictured inside the United States focusing on just how large of a land mass they are….Show offs!

However, this becomes important in the arena as it helps one differentiate between the delegates, official staff, the media and/or guests.

But, I digress. Last night, I was fortunate to have traded my cheap seats in for a real seat on the sidelines.

Here was my view.

Snuggled up right behind the main stage and close to the NPR box, I was seated on the aisle and really able to watch people enter and exit the floor along with the activity taking place throughout the arena. 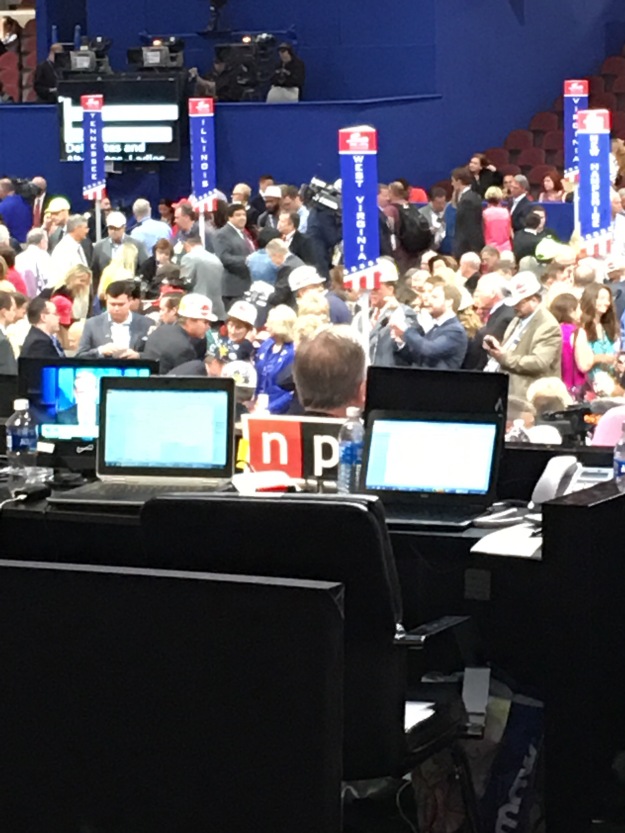 Looking for Rachel Martin with NPR, but found Megan Kelly, or Megan Kelly’s back rather. 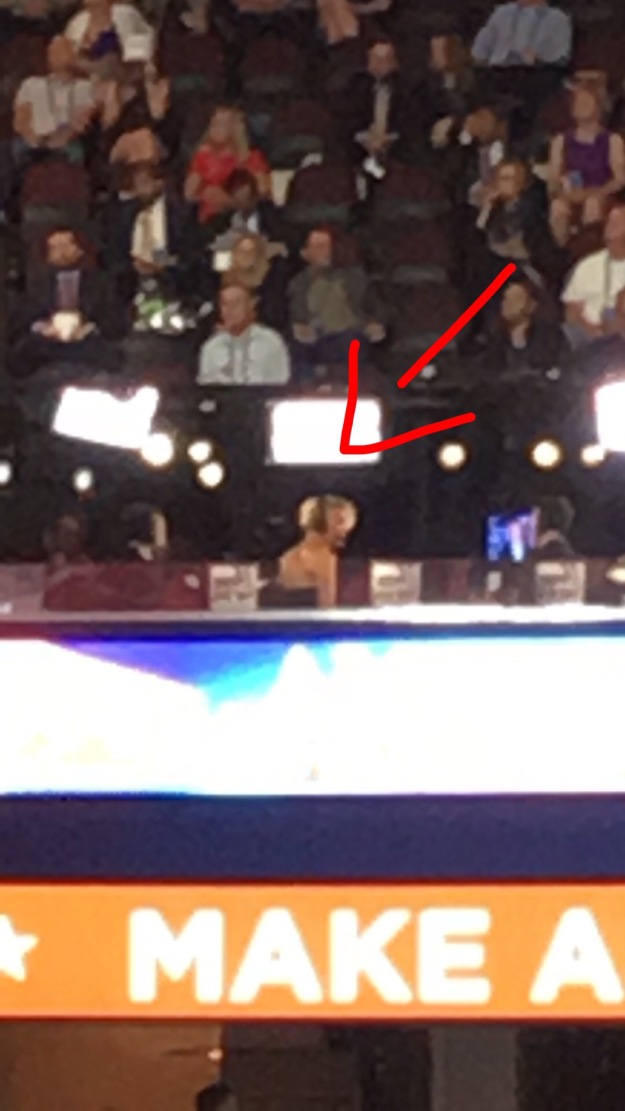 I love her, really I do but OMG! what was she (not) wearing?!! Not judging or anything but you can see what it looked like from my lens.

It was also a great spot to watch our friend, Harold Hamm speak about Donald Trump and the economic and national security that comes from energy independence. 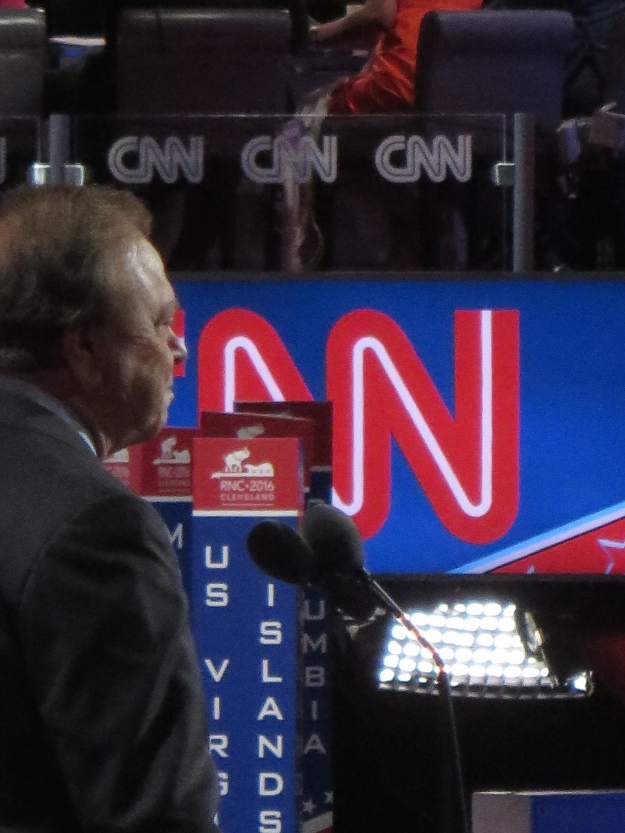 A great angle to watch Laura Ingram give a rousing endorsement speech for Trump as well as Marco Rubio.  Endorse Trump he did.

It was also a solid spot to watch Ted Cruz get booed out of the arena.  Yes.  He really did get booed and if the crowd was allowed to bring whole fruit into the arena, they would have pelted him with oranges and tomatoes.  I’m just sure of it.

It would seem the media narrative is quite different from the scene I observed. Shocker!
I watched Ted Cruz deliver a very self promoting speech of sorts.  It felt like an acceptance speech for the job he wanted but couldn’t quite obtain?

Regardless, when it became obvious that he was not going to endorse Trump, the arena instantly turned on him.

The chants seemed to start in the rafters (not with the New York delegation up front as he claimed) and spread like a prairie fire around the arena and onto the floor.

Left without an opportunity to conclude his non endorsement speech (or lecture about voting your conscious in November), the Q was erupting with loud jeers, chants of “Trump,” and venom. He could barely say thank you and God Bless America, while the arena booed him right off the stage. I heard his wife even had to be carried out by the Secret Service. I have never seen anything like it in my life. Ever.

My take is Cruz knew he had stacked the delegate roster in most every state with his supporters and that he would have the crowd on his side.  But, this being the third day of the convention, I think a majority of the delegates had decided it was time to board the Trump Train and dedicate their energy to helping Trump be a better candidate, have a better ground game, or raise the necessary funds to win in November… because electing Hillary is not an option.  Had Cruz’s speech been on the first night? Maybe not.

Regardless, this evening in the arena was over the top.

Oh, so after the Cruz speech we ran out to grab a water bottle and were unable to re-enter because the floor was on lock down or over the fire code depending on who you talked to.

Yes, there were probably way too many people on the floor.  Even from my seat on the sidelines, I noticed lots of media cameras walking down the aisle prior to the Cruz speech – and they were escorting several people down to the floor, without the necessary credentials (the badge worn around ones neck giving you access to certain areas), and none of them were dressed in delegate attire which immediately stands out for that level of floor access.

Having noticed that, we also heard folks with Black Lives Matter had gained access to the floor, huddling up in the back and were planning to storm the stage hence the lockdown of the venue. Doesn’t take a genius to figure out how that happened!

On the ground today, we learned media badges were in fact being sold for $1k.  Turns out, that was a bad investment for George Soros.

Since we were locked out, we ran outside to hear the speeches on the big screen…which is where Cliff decided to run for Mayor of the Texas Delegation haha. 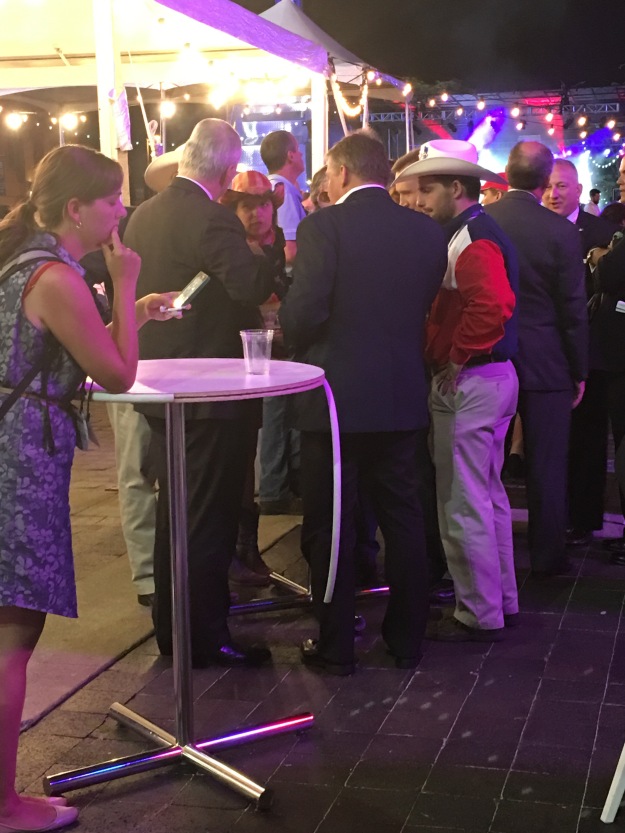 Then, we headed back to the bus, but not before giving a shoutout to our friends at Facebook. 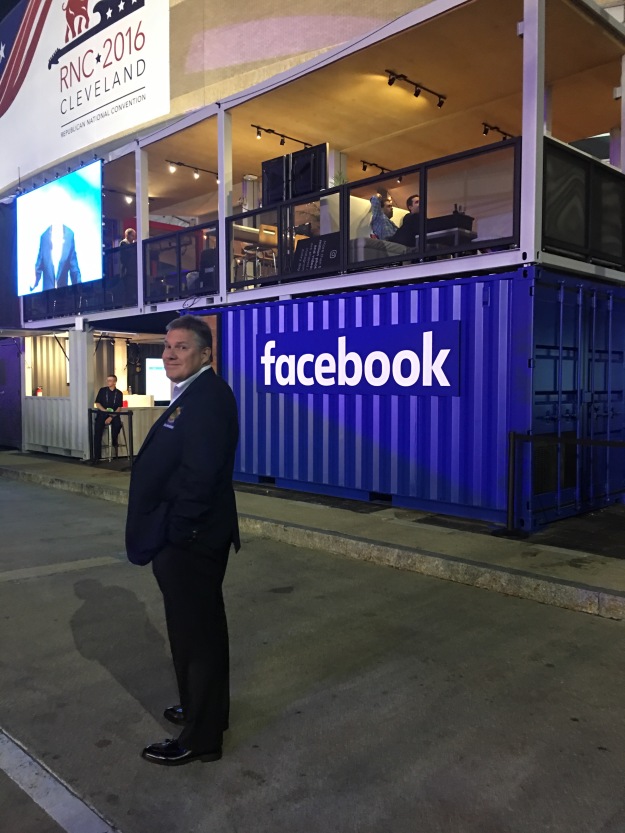 Then, halted at the gates due to protestors in the area or Mike Pence’s motorcade. 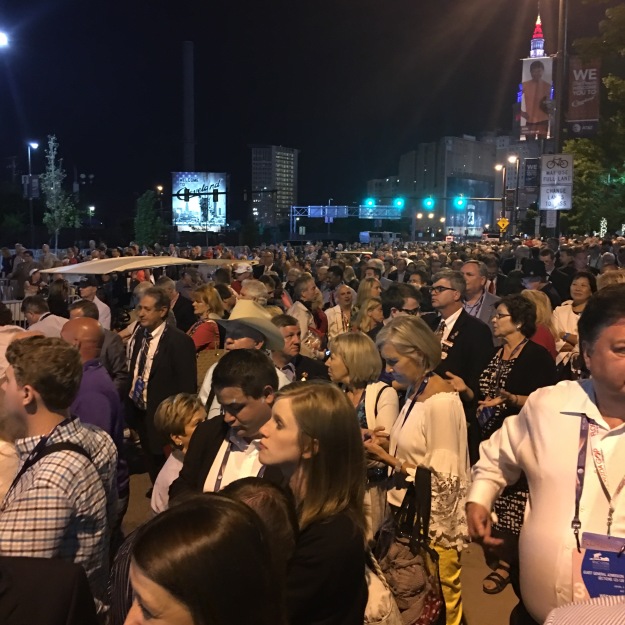 Jury’s still out on that one.