Thought this little trivia quiz the kids and I made up a few years ago was worth a re-post today on President’s Day…..just for fun and a little perspective.  Enjoy!

1. In American History, only four presidents have been elected while they were serving as vice president. Can you name them?

The Answer: John Adams, Thomas Jefferson, Martin Van Buren and George H.W. Bush.  Note:  The Senator’s son informed me that Harry Truman was actually serving as Vice President when he succeeded FDR who died less than three months into his fourth term. Cool.

The Answer:  Grover Cleveland was elected in 1884 and 1892, but was beaten by Benjamin Harrison in 1888. Clearly, an interesting time in our history!

3. Which President was the “Bachelor President”?

The Answer: James Buchanan. Alone among American presidents, he never married. Hmmm, not gonna go there, but here is a portrait of our 15th President.  You decide. He was also expelled from college so I’m thinking there’s a good story here. 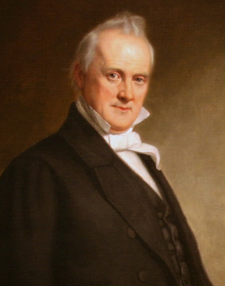 5. Why was the White House painted white?

The Answer: The president’s house was painted white to cover the scorch marks left by its burning in 1814 by British troops.

6. Who was the only president who had been Speaker of the House of Representatives?

7. How many served both as Secretary of State and president?

The Answer: There were six: Thomas Jefferson, James Madison, James Monroe, John Quincy Adams, Martin Van Buren and James Buchanan. Obviously, in our early history, this cabinet post was considered a stepping stone to the presidency.

8. Who was the first president to travel outside the continental United States while in office?

The Answer: Woodrow Wilson became the first globe-trotting chief executive when he led the American delegation to the Paris Peace Conference in 1919.

9. Who was the youngest man to become president?

The Answer: Theodore Roosevelt was 42 when he assumed the presidency after McKinley’s assassination in 1901.

10. Five presidents in our history were never elected president. Which presidents achieved the presidency only by succession?

Oh – extra credit if you can name the president in the photo up top…..