I really can’t say anything about that photo other than I smile every time I look at it. Everything you read about our Heisman Trophy winner Sam Bradford is true. He is smart, charming, nice and tall…very, very tall! He and the Senator were talking in their native language… which would be Cherokee. They had a casual conversation and he was extremely gracious about the photo. Not my idea, I would never want to impose, but …

There are always celebrities on hand for Red Tie night, always. This year, Heisman Trophy winners Jason White, Billy Sims and Sam Bradford were on hand along with Barry Switzer and singer/song writer, Graham Colton. The Senator also managed to get in a conversation with Desmond Mason, a player with the Oklahoma City Thunder but I was unavailable for a photo gosh darn it. I like Desmond Mason. He is a basketball player and a contemporary artist…multi-talented and also very, very tall. Four inch heels are a prerequisite for hanging out with this crowd! 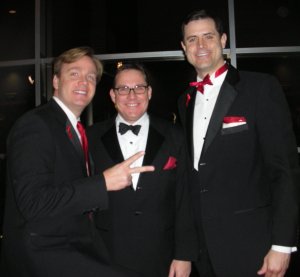 Here is the Senator with a couple of his friends. Pictured on the left is Peter Regan, a former candidate for Lieutenant Governor. Although, his bid for that post was unsuccessful, he is currently a rock star in the Democratic party and my insider information tells me he is far from finished…politically. (Any guesses on what he’s trying to do in that photo are fair game!) Pictured on the right is Renzi Stone, of Saxum Communications. Yes, he is also very tall and a former OU basketball player. The Senator and Renzi were in Leadership Oklahoma, Class XVIII together. Those boy do clean up well!

And, then there were hundreds of beautiful people, hundreds of them, out in full force to support a very worthy cause. Here I am pictured with one of my friends. She definitely falls under the category of ‘beautiful people’. As for me…I was just doing good to be there.

Oh. The long vs. short dress dilemma is moot at this event. You see it all.

← Perpetual Dilemma
Will he or won’t he… →