Will he or won’t he… 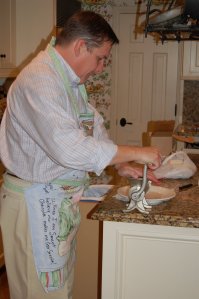 …be home for dinner?

This is a recent photo of the Senator grinding meat for his tenderloin chili recipe. Sometimes he cooks this for friends, or a church supper club or a special occasion because it’s tenderloin chili and absolutely delicious. It is his very special recipe. His own little creation. It’s even been published in a cook book because it includes real tenderloin not just ground up chili meat which is what makes it so special. Promise.

The reason I’m posting this photo is because it reminds me of the good ol’ days when my Senator actually made it home in time for dinner. During the legislative session, the chances of my Senator joining us are slim to none. Probably not gonna happen.

When he was first elected, I used to cook dinner hoping for the best case scenario which would have him flying through the back door just as dinner was served. I would even go to the trouble of cooking something he really might enjoy after a hard day at the Capitol which typically resulted in a messy kitchen, no Senator and tons of left overs. Just to prove my point and for the record, the Senator has been home for dinner once (OK, maybe twice) in the past MONTH at which time he brought his friends along with him! We’re not holding that against him or anything. I’m just saying he is a public servant and dinner is simply an extension of his work day.

Regardless, dinner with the Senator during session is never a guarantee. We never really know his status, it is always fluid and one must master the art of graceful flexibility. It’s not like I enjoy cooking or anything, that is a completely different post…I just enjoy his company.