This is our rescue dog named Scooter. 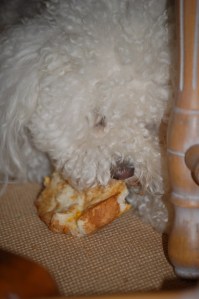 Yes, that is a grilled cheese sandwich in his mouth!

It was from Sonic and it belonged to the Senator’s son.  Well, before he left it sitting on the table – alone – for roughly five seconds. But, that would be just enough time for Scooter to snatch it up off the table and take it down under for consumption.

We were in shock really that this dog could maneuver so quickly to steal a sandwich literally right out from under our eyes.  Totally speechless,  that we just stood there laughing at him and each other.

It’s not like this dog is hungry.  Seriously, he is very well fed and obviously a tad bit spoiled.
So,  the Senator’s son decided to chase him around the house in an attempt to steal the grilled cheese back. NO, not because he was going to eat it or anything, definitely not that, but more for a show of look who is boss now Scooter!  Or, I can run faster than you Scooter…Or, you just stole my afternoon snack and I’m gonna make you work for it…

If only for just a moment… 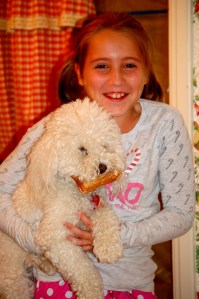 I think Scooter needs some time at the spa.