Three years ago I was introduced to a very special organization called American Mothers. American Mothers has a rich history that really began with a lady named Anna Reeves Jarvis. During the Civil War, Anna Jarvis sought to heal the hearts and homes of those affected by war and organized a friendship day for families to put down their weapons and honor their mothers across the battle lines. Because of the efforts of this woman, the first Mother’s Day was unofficially observed while our nation was at war.

American Mothers was formally organized in 1933 as a division of JC Penny’s Golden Rule Foundation.  Under the Golden Rule Foundation, this group raised money to assist mothers and children in need. It also became the official sponsor of Mother’s Day and emphasized the important role of moms whether in the home, the community, the nation or the world. Sara Delano Roosevelt served as the organization’s Honorary Chairman as did Mamie Eisenhower…They would also name the first American Mother of the Year in 1935 at the Waldorf Astoria in New York City to publicly recognize the positive difference moms were making around the country. The first Young Mother of the Year was honored by American Mothers in 1968.
This time honored tradition continued and in 2006, that was me. The 2006 National Young Mother of the Year. Have no idea how that happened….but it did.

Speaking of the convention, that is when the National Mother of the Year and Young Mother are selected.  The convention is held in different parts of the country just prior to Mother’s Day.  In 2006, the year I was named Oklahoma’s Young Mother Representative, the convention took place in Bismarck, North Dakota. Brrrrr.

The Senator went with me because why else would you ever have a need to go to North Dakota?

Below is a photo with the 2006 Young Mother from Oregon. We were both from states that started with the letter ‘O’, so we spent a lot of time standing in line together and sitting by one another. We called ourselves the ‘Cheerio O’ state girls. She has five children. You heard me. 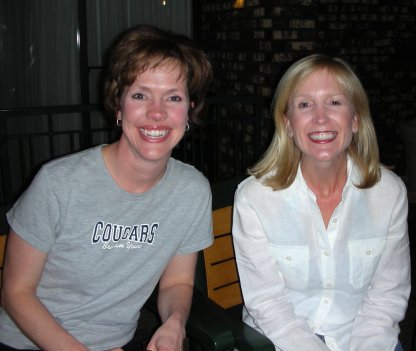 That pales in comparison though to the Young Mother from Utah, (pictured far right) She has seven children.

Since 2006, I have attended two other American Mother conventions, one in Las Vegas and the other in Lincoln, Nebraska.

In fact, a significant benefit of membership in this organization is the opportunity to meet moms from all across the nation, mothers from all different age groups, educational backgrounds, and religious beliefs whose focus is their family.

Here are two of my favorites moms from American Mothers . We look like we were having fun because we were, I mean, who doesn’t in Las Vegas.

And just so you know, American Mothers is a national non-profit organization dedicated to honoring, educating and serving moms and children. It is a non-governmental organization at the United Nations with a National Office located in Washington DC.
In fact, this week American Mothers, Inc. will name a new National Mother of the Year and Young Mother of the Year.
I’ll keep ya posted.
Love, the Senator’s Wife