Last weekend my Senator and I went to a Mardi Gras party at a friend’s house, and it was some Mardi Gras party. In fact, it was the real deal as these friends herald from “the deep South”. They had imported food, cups, king’s cake and of course tons of Mardi Gras beads.

In speaking with our host and hostess we learned all about the history of Mardi Gras. She had even printed up a copy of it which she gave to all the guests as party favors. You learn something new every day.

My favorite tidbit however, was the cape hanging in the corner. This was her cape that she wore in a Mardi Gras parade. It was homemade and had a colorful applique of a giant catfish sewn on the back. Our hostess explained that one was supposed to choose items that represented their interests to adorn the back of their queen’s cape with and she liked to fish. Hence the catfish. Not real “queen” like, she went on to explain, but then that was half the fun of it! We like her…a lot! 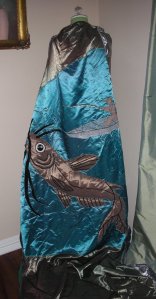 Here is what else we learned from our Southern friends: Mardi Gras, translated from the French means “Fat Tuesday.” Fat Tuesday falls on the Tuesday before Ash Wednesday. Ash Wednesday is the first day of Lent, the solemn forty days prior to Easter. Since Easter is a movable feast day, Mardi Gras changes every year and can be as early as February or as late as March 9th.

Carnival is a period of feasting and celebrating before the fasting days of Lent. Carnival starts January 6th, the Feast of the Epiphany and ends at midnight on Fat Tuesday. Carnival is a Catholic celebration and is licensed by the Catholic Church. Carnival means “farewell to flesh.”

King cake is only eaten during the carnival season. King cake is a French pastry made traditionally with cinnamon and colored sugar and is oval or ringed shaped. Now they are made in several flavors. King cakes have a bean or a baby doll hidden in them. The person who finds it buys the next cake or throws the next party. King cake is always decorated with sugar in the colors of carnival which are purple, gold and green. Purple symbolizes justice, gold symbolizes power and green symbolizes faith.

More than you wanted to know… but you can”t say you didn’t learn anything today!